Ok, more stories from the quilt.

After the funeral, we had friends and family pack up all the display tables of Chris’ lacrosse stuff, pictures etc.

It was days later when we realized that many people had brought items with them and left them on the tables in memory and honour of Chris. 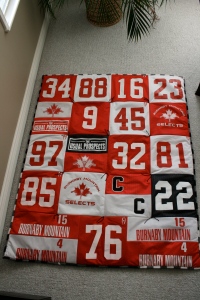 The Burnaby Mountain Selects program meant so much to Chris and many of the guys brought their jerseys to the funeral and left them there.  When we found jersey after jersey at first we were confused.  Then we realized what happened and were simply overwhelmed with the thought behind that action.

One entire side of the quilt is dedicated to the the BMS family which really symbolizes the entire lacrosse family as these players came from different towns and different teams.  Some of them had been big opponents, but were now brothers-in-arms.

This quilt and that gesture of support and recognition will never be forgotten.  Thanks to everyone who brought something with them, wrote a note for Chris or to Chris or said a prayer or had a thought of support for us that day and for all the days since. 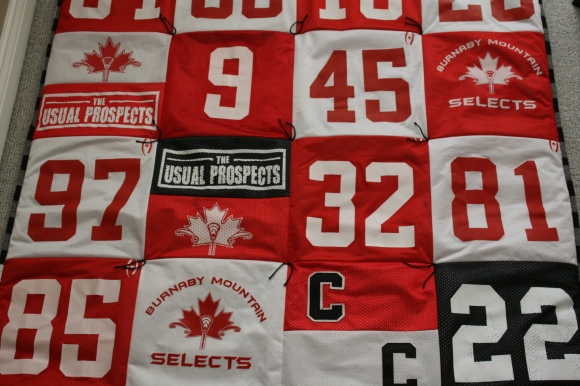