Maybe a strong GO CANUCKS GO doesn’t fit in a blog about loss, grief and the new normal…but I beg to differ.

I’ve written before about sitting down with Max and Chris watching the Nux getting eliminated from the playoffs by Chicago.  I told them that sick feeling we all had was what it was like being a lifelong Canucks fan.

Sure that was an emotional statement at the time, but ultimately, I still had hope.

Now what I’ve learned about HOPE is that it’s an action word.

So, this season we cheered, watched, joined hockey pools and generally had a great time living the experience with the Canucks. 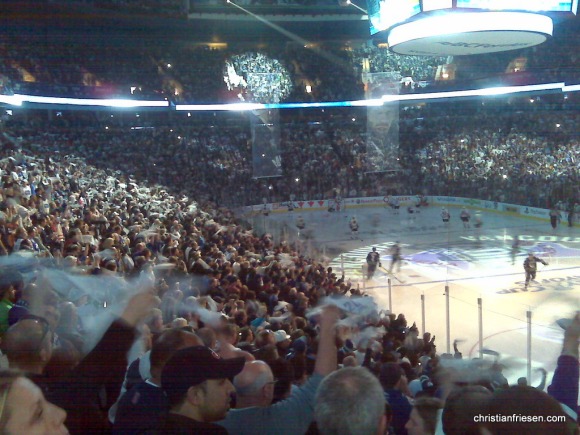 That brings us to this week.  Due to a friend’s ridiculous schedule and fantastic generosity Max and I ended up with tickets to Game 7 on Tuesday.

I was ecstatic to take Max to that experience.  This pic (lousy blackberry camera) shows the hype and excitement…and that was just the pre-game!

I wanted to wear something from Chris as well.  I chose his shoes.

When Burrows scores a goal he sometimes shoots an arrow into the sky to remember his friend and fellow Canuck, Luc Bourdon, who had died in a motorcycle crash in 2008.

When Burrows scored in overtime on Tuesday night, Rogers Arena erupted like a volcano.

I don’t think Burrows had a chance to shoot his arrow as he was mobbed and crushed in a happy dog pile.

The emotion I felt was incredible.

I remember high-fiving with Max and others fans around, but mostly just holding my arms in the air and screaming like a moron.

In that moment time stopped and I thought of Chris.

I loved standing in Chris’ shoes and drinking in the excitement of the crowd.

Although they couldn’t be there in person, I believe Chris and Luc Bourdon and many other hockey fans were cheering loudly up in their lofty box seats.

Take a look at this pic.

Ok, maybe not roller derby, but he and Mom found roller skates for the whole family and turned the basement into a roller zone…complete with a ramp!

It was great fun.

We were at some friends recently and their two daughters put on several skits, songs and dance routines throughout the evening.  We loved it.

As the rush of Christmas week comes surging on us, I love to think of these simple, fun family times and the memories they create.

I’ve heard of families heading for ski hills and others heading to warm beaches over the next week.

Whatever you do, I wish you a lifetime of great memories.

For us, we will be creating new ones and also dipping into our bank of memories.

We are thankful every day for the deposits we’ve made through trips, adventures, and just crazy stuff around the house…just like my Dad did with roller skates in the basement!

You all know Barbara Walters.

She’s on the View and has hosted many many interview show specials including years on 20/20.

Have you ever noticed how many people cry when they get interviewed by Barbara Walters?

Is it the tough questions?

I think it’s more than that.

Check out (or just take my word for it), this Oprah interview with Barbara Walters from 2004.

There’s a part at the end that is quite revealing:

Barbara: Sometimes it’s okay—and sometimes I can’t drive. Most of the time when I look back on what I’ve done, I think, “Did I do that?” And you know what I say to myself? “Why didn’t I enjoy it more? Was I working too hard to see it?”

Oprah: Because you were just going from one plane to the next.

Barbara: And worrying about the shows and getting them on the air—and then thinking, “Was it right?” What I’m trying to do now, before it’s too late, is to finally smell the roses. I know it’s a cliché, but I want to enjoy it. I want to get rid of the alarm clock every day. I’ve done enough.

Oprah: What you just said in that moment changed me. That resonates with me to the core, big-time. I got it. I’m trying not to cry. Everybody always ends up crying in your interviews.

Barbara: Time is what it’s all about. Look at all those pictures in the hallway. Look at what I accomplished. Yet I was always onto the next thing.

Oprah: Wow, Barbara. That was the most powerful insight you could have given me.

Subtle, but plain as day.  Oprah states, ‘everyone always ends up crying in your interviews’.

Why?  My own belief is that people know they are going to be interviewed by (or in this case interview-ing) Ms. Walters and they are already thinking about the deep issues, knowing that they will probably be discussed.

In a way, they are preparing themselves (consciously or subconsciously) to go ‘deep’ on an emotional level.

The reason the title is ‘who is your BaBa WaWa’ is two fold.  Firstly, the beloved Ms. Walters has a wonderfully mockable accent that has been parodied extensively and her name comes becomes Barbara (or BaBa)  WaWa on these sketches (think Saturday Night Live for example).

The second and much more relevant point to this discussion is that I’ve had to learn that I needed to find my Barbara Walters moment from time to time.  A place, a person, a time, a situation.  In other words, planning to meet person a or person b.  Planning to go to this place or that place, knowing ahead of time that those visits would be significant.  That…is a cathartic part of this journey.

And just to be clear, it doesn’t mean I am going on the View any time soon!  I’ll leave that to Bill O’Reilly….