My little niece Emily (3) had a pet gerbil, or hamster or something like that.

I should really have more details on these things.

All I know is that it was fluffy and sat around in the cage a lot.

As things go, her little pet passed away.

No, she said, ‘Fluffy’ (not his or her real name, not to protect the hamster/gerbil, but because I just forget what the name was) would be with Chris.

Now that’s beautiful, cute and sort of funny too.

I can image Chris and Dylan up there working hard and then chatting up some young angels when this gerbil thing just sort of appears.  ‘What the whip?’, Chris would say.

And then the head Pet Angel would inform Chris that Emily had made the request.

Do you really have to still clean the cages up in heaven?  Are there cages?

Anyhoo Chris, be good to Emily’s pet…I know you will!

I notice that WordPress has allowed more advertising to creep onto blogs.  If you see ads on this blog from time to time…sorry about that!  My understanding is that is a drawback of a ‘free’ blog site like this.

As we approach April 2012, we will have lived the past 2 years without Chris.  It feels like a flash and it feels like a thousand lifetimes.

I miss that kid so much I simply cannot tell you what it feels like.

So…where do we go from here?

Stay tuned, as we are going to complete a refresh of christianfriesen.com and we are working on a free e-book which will include all the blog posts of the past 2 years.  From time to time I see older posts being viewed (via stats) and I know there have been people who have experienced loss looking through a number of posts in chronological order.  That is what we’re attempting to do with the e-book.  Have everything in date order and easier to read.

So for now, we’ll tackle these next couple of months and prepare for the next chapter of Be The Best.

I know many of you have been writing your own, and I love it!

Have a great week.

When Chris played for Team BC in the Box National tournament in Ontario as a 14 year-old, we witnessed some amazing lacrosse.

Of particular note was team Iroquois.  They were small, but fast and they never ever gave up.

I’ve written about them before but was reminded of them again this week when a video link was sent my way.

Johnny Powless played at that tournment and was a lacrosse wonderkid.  Sort of Gretzky-like.

Amazing with the ball, without the ball and knowing where the play was going at all times.

This video link shows Powless scoring a goal in the NLL a few weeks back.  He’s just 18.

I know beyond a shadow of a doubt that Chris is still watching this kid go.

At the tournment back a few years ago, BC won the Bronze in an epic battle with Alberta.  We all stayed to watch Iroquois Nation go against Ontario.  Truly David vs Goliath.  I’m literally getting goose bumps as I type this remembering the game.

The Ontario team was HUGE.  They have a massive population and they could have had 3 or 4 top teams and still been competitive.  The Iroquois team was small.  But they didn’t give up.

I know they made a big impact on the BC boys watching.  In many ways it was the early days of Be The Best.

Yes, Iroquois did prevail to win the gold in one of the most fantastic lacrosse games I’ve ever seen.

Here’s Johnny doing his thing today.  I’m wearing my purple Iroquois t-shirt with pride today and still have the hand- made wooden lacrosse sticks dangling from the rear view mirror of our car.

Watch a little Be The Best in action…and this kid is only beginning.

Yah, I’m sure Chris is impressed.

You can insert your own caption for this one.

As commercialized as Valentine’s Day is, I hope you had a chance to hug a person or two that you love and tell them how much they mean to you.

Every chance we have to do that is gold.

Now technically, my Dad is not 81 until Thursday…and ski lessons from an 80 year-old has a nice ring to it as well, but in honour of the upcoming day we’ll go with 81!

I wrote a Valentines Day/Birthday post last year at this time about Dad and Mom and Dad’s 80th.

Then the world got very interesting for them.

Both Mom and Dad were very ill and ended up in different parts of the hospital at the same time.

Their recovery was equally amazing and although my Dad had a few more surgeries than expected and now lives with an ileostomy and Mom continues her chemo fight…you’d probably have a hard time figuring that out.

Well, Mom is walking around town to her appointments, hiking and volunteering at a local thrift store and Dad is speaking to groups of seniors and others about his experiences and oh yah, going skiing!

I didn’t hear this week’s report, but last Friday night after a layoff of over a year, the boards were slapped on as this soon to be 81 years young Great Grandfather hit the slopes.

Now that’s a ski lesson for all of us, whether we ski or not.

Mom and Dad, we wish you a wonderful Valentine’s Day!

On our recent vacation we saw turtles.

A whole lot of turtles.

I’ve got one picture with six of them sleeping on the warm sand.

I’ve also got a picture of a turtle in the water.  Completely different.  They are fast, fluid and graceful.

Out of the water they are…well…slow.

They sleep a lot.

Observing them I couldn’t help but think again of the story in the Power of Focus book about a successful businessman, who when asked about the secret of his success stated, ‘I spend a day a week locked in my den and no one can disturb me.’

Yah, I think being slow, sometimes, is the key to being fast.

Thinking, taking time, getting recharged, soaking the rays, prepares the mind and body for the swim ahead. 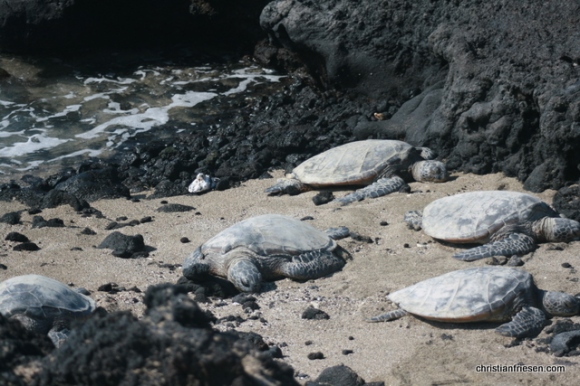 In the first year after losing Chris, I spent many evenings watching the sun set and to this day I can’t watch a sunset or look at a moon lit sky without thinking of him.

On a recent vacation I thought about where we were and where Max was separated by a huge ocean and hours of flying.

As I looked up at the night sky with stars as bright as I’ve ever seen, I thought of Chris being high enough to connect to Max and at the same time keep an eye on Ingrid and myself.

(and yes, that’s a lava rock formation in the water, and yes, you can download pictures or link to them!) 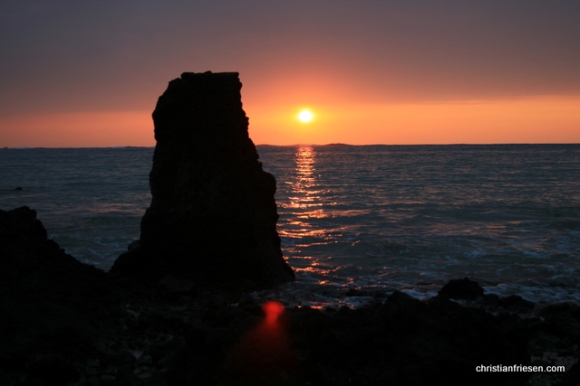 Of course that was Chris’ main Langley number.

Whatever we do, wherever we are…we always remember.  And it pushes us to Be The Best.